Heart disease used to be considered a "man's disease", but no longer. While heart disease is on the decline among men, it is rising among women. Heart disease is the number one killer of women over 35 worldwide, accounting for more deaths every year than all cancers combined.

Much of what we know about the diagnosis and treatment of heart disease – including conditions of the heart, its valves, arteries and other blood vessels – is based on research in men, but women’s hearts and the way they experience heart disease are different in many ways. These differences are important because they can affect how heart disease presents itself in women, how it's diagnosed and treated. It also affects women’s survival rates. It’s sobering to realize that women are 50 per cent more likely than men to die within the year following a heart attack.
It doesn't have to be this way. With the right information and action, it's possible to prevent heart disease or improve your chances of surviving it to lead a healthy life. The Canadian Women's Heart Health Centre can help you take the first easy steps toward a healthier heart by arming you with information.

Here are some of the ways heart disease is different for women: 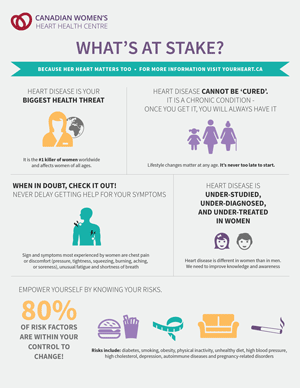 Women generally have higher heart rates and smaller hearts and arteries than men. They have less buildup of plaque in their arteries, and the plaque they do have tends to behave differently. While male hormones enlarge arteries, female hormones make them smaller, making women's arteries more prone to blood clots or blockages and more difficult to repair.

Some risk factors are different.

The traditional measures of risk underestimate the dangers for women. While men and women share the most of the same traditional risk factors, some risk factors carry a stronger relative risk in women. Smoking, diabetes, high blood pressure and a family history of heart disease have been found to be red flags for women in particular.

Women’s symptoms can be different.

Women’s symptoms are often labeled “atypical” because they differ from the classic symptoms found in men. While both men and women often report angina - sharp and crushing chest pain - in advance of a heart attack, many women also experience an ache across the upper back and in the stomach, as well as shortness of breath and extreme fatigue. Because symptoms in women can be less specific, they can be harder to recognize as danger signs.

Most women experience their first symptoms or heart attack after the age of 65, while for men the onset is around 55. But the build-up of artery-clogging plaque can begin as early as 20 years old, so it’s important to take care of yourself at every age. It’s believed that estrogen protects most younger women from heart complications but once estrogen levels drop during menopause, the risk of heart disease rises. Being older also means women are more likely to have other conditions, such as diabetes, that further complicate the identification and treatment of heart disease.

Most guidelines for diagnosing heart disease were based on studies of male patients. For example, current medical guidelines for diagnosing coronary artery disease focus on detecting a kind of damage to the arteries that is more common in men than in women. The result can be missed or delayed diagnosis for women, leading to delays in treatment. In the last 15 years, new research on heart disease in women has produced valuable evidence to help inform new medical guidelines.

Some diagnostic tests long considered standard in cardiology have been proven to give inconsistent or confusing results for some categories of women. In spite of new research regarding testing for heart disease in women, there is still debate over which tests and diagnostic strategies are the most effective.

Women may get treated differently.

Women are under-studied and under-diagnosed when it comes to heart disease, leading in a significant number of cases to under-treatment. Many people, and somemedical practitioners, are still unaware that women have a higher rate of death from heart disease than men, that their symptoms are often different and that they may require a different diagnostic approach. The result is that women don’t always get the most appropriate treatment because the severity of their illness is underestimated.