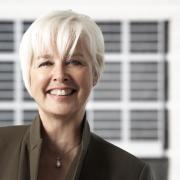 In my early 50's I was diagnosed with high cholesterol and put on medication. This was considered something to watch as my father had died at age 39 of a massive heart attack.

I continued to work full-time as a Program Manager in the Ontario Government but over the years I began to experience chest pain when going for a walk. In my late 50's I was diagnosed with stable angina and was prescribed Nitroglycerin. Stress and exertion increasingly caused my chest pain and in 2010 I was hospitalized with suspected unstable angina... a catherization showed that I had 60% blockages in two major arteries, along with other arteries with 30%.

Because the blockages were less than 70% my treatment was aggressive medication therapy. I completed the cardiac rehabilitation program at the Heart Institute at that time, which I credit with motivating me to establish a regular exercise regime. I was stable for the next two years with this treatment.

However, in 2013 I began to experience increasing difficulty with my exercise program with the new symptoms of shortness of breath, and jaw pain and fatigue upon less exertion. An early retirement at age 62 helped to reduce the stress of working life however, my symptoms continued. In January 2014, a second catherization showed progression of the blockage in my left artery to 80%, which was stented and most likely prevented an eventual heart attack. The success was immediate. I have renewed energy, am back on the treadmill meeting my exercise targets, and relatively symptom-free.

I continue to wonder why, out of my three siblings who are smokers, I, the one who never smoked, am the only one of us who has this disease. Genetics obviously plays a serious role. Interestingly, my doctors say that compared to my father who was a smoker, I have bought myself many years by following a healthy lifestyle.

Since my recent catheterization I have joined the Ottawa Heart Health Support Group which provides patient education through a monthly speaker series by Heart Institute specialists. I also look forward to participating in their new Women's Heart Health Centre initiative.

It’s often stated that women's symptoms are ignored by physicians as being heart related. The Ottawa Heart Institute is at the forefront of changing this trend for the benefit of all of us.

I agree to my story, photos, and videos being used